Your job title may be holding you back

A recent article suggests that employees are being pigeonholed by their job titles and not being utilised fully by companies? Another even suggests whether job titles are even needed in today’s business world.

What do I mean by this? Well, some employees in big companies are overlooking talented staff because if for example their job title is sales executive then they most probably won’t be asked to assist with any other sectors of this business, such as technology or business planning yet they may very well excel in these areas. So this then brings on people being sectioned into doing one job when they could potentially very easily help the business out by sharing their talent and skills. 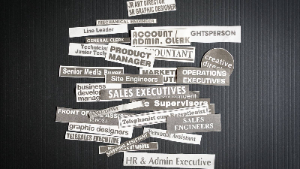 Think of the bigger picture

Roberta Lucca the co-founder of Bossa Studios shared some advice; “Don’t be trapped by your job title”. She argues that if we get constrained by titles so much that we covet, we will forget that we could make an impact across the company, rather than just one sector of it. This issue is primarily within bigger companies but we shouldn’t let it get to us and stop us from branching out with our skills and giving a helping hand! Speak up, let your manager know you are a boss at video-editing, or catering, or business management, or organisation.

In reality, job titles can be more about the status rather than an accurate description of the role. Which is fair enough as some people work as hard as they can to achieve a higher job title as this is important to them. It all depends on how your brain functions I believe. If you thrive from feedback and compliments from other people then hunting for that higher job title is probably something in which you are interested.

If you really don’t care about your job title and just want to get tasks done that you enjoy and know you are good at then what would be the point for a job title? Would people like that just rather nothing and just give helping hands out whether needed? I know personally I don’t agree with job titles as some higher, let’s say more desirable job titles don’t come with that much work load and you hear stories of people moving into a fancier office and job role and hating it as they feel segregated and bored.

On the other side of the spectrum, small businesses and startups are usually all hands-on-deck with every employee needing to chip in and help as every skill is valued and utilised, whereas this gets lost within bigger businesses. 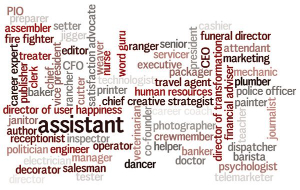 But why? Is it due to the fact that they are trying to make as many jobs as possible for people and believe it is just easier having everyone do their little bit and leaving at the end of the day, instead of everyone chipping in and utilising their skills for different tasks.

Are job titles important today? Is the title of anticipation designer important? What about the philosopher of attractive design and well-being? They aren’t really are they? When you boil it down they are just over complicated names for jobs. If we had only a few titles to keep things in order and everyone chips in their unique valuable skills then a lot of big businesses would be thriving. It is sad knowing that so many people don’t get to utilise their skills in business even if they really want to show everyone what they can do, but alas they aren’t allowed or even considered due to their job title. Let’s give the boot to misleading titles!

What are your thoughts on this concept? Where do you stand?

Business Butler is an on-demand talent platform that connects users with a panel of vetted business experts who specialise in a range of disciplines including marketing, law, finance and human resources. To find your ideal expert please click